Let’s explore some of the popular companies that use python language to develop websites and apps. But, before moving ahead and checking the list of companies using Python. Let’s brush up a little with Python’s history and more.

Python is mainly used as a high-level programming language. It was designed in 1991 by Guido Van Rossum. It was developed under the Python software foundation. It is a powerful programming language that offers higher code readability and allows fewer lines of code that are easy to understand syntax. Guido Van Rossum started working on the project as a hobby at Centrum Wiskunde & Informatica (CWI) situated in the Netherlands.

Python uses the ABC programming language and has an interface with the Amoeba Operating System. The syntax of ABC has been featured in Python development. Python has become popular because it uses limited syntax and less code having higher readability when compared with other programming languages such as C, C++, and Java.

LET’S EXPLORE HOW PYTHON BENEFITS TO THESE PIONEERING COMPANIES 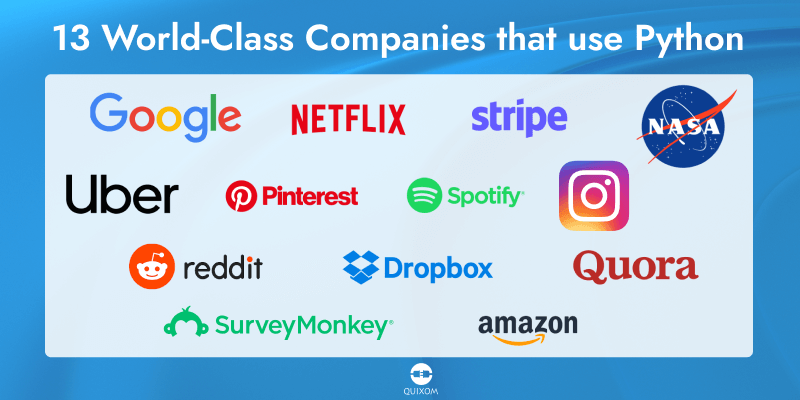 Google is one of the most popular companies using Python programming language from the very beginning. Python is the preferred language for tech companies like Google as it allows speedy deployment, easy maintenance, and readability. Google has decided to make use of the C++ language as a part of memory control coding syntax that enables imperative memory controls with limited latency.

Google is also written using Perl and Bash scripts and its web crawling spider in Java 1.0, but both of them have been re-coded into Python due to their scalability, readability, and excellent performance. Apart from that, Python has been widely used in Google APP Engine, Google AdWords, YouTube, AI & ML, search engine algorithms, and Robotics projects.

Another one on the list is Netflix. Yes, you read it right, Netflix is also among the companies using Python. It makes use of the power of data analysis of Python when you use it on the server side. Most of the engineers working at Netflix use Python which is well suited for several applications. Netflix mainly depends on the standard library offered by Python which can be actively used as a part of the development community.

The third-party rich variety of libraries is useful in managing every problem faced. Python offers its services on Central Alert Gateway. The web applications can alert the system and allow it to be used with every rule and responsibility. The applications developed using Python have become part of Netflix’s success. The apps are highly effective and handle every process intelligently by reducing the work of engineers and developers.

Instagram is a feature-facing platform and Python has been of great help there. One of the main reasons Instagram chooses Python is its simplicity, scalability, and popularity among the developers and thus, facilitating the resources becoming easy for this rapidly growing company.

Instagram has raised its users to 500 million which increases the requirement to expand efficiency and speed to keep their service on scaling with ease. Engineers at Instagram use Python and Pyre to create static sort checkers that help them with scaling and efficiency.

Django for web applications, site pages, and web organizations is also used by Instagram whereas Sentry, an open-source Django application, is used for error bugs. So, these are some of Python’s best capabilities and a great contribution for Instagram to serve its users without a glitch.

Since speed is a priority for Spotify, Python has helped Spotify with the same. Spotify has a wide range of services connected with the messaging protocol. These services are based on 80% of Python programming languages. As the key priorities of Spotify are growth and rapid development and thus, they use Python for developing its streaming services.

Spotify is also one of the largest companies using Python today, as it hires over 6000 Python processes that work together with the nodes of the Hadoop cluster, which is used in Luigi a Python Module to provide information and recommendations to users.

In addition, Python manages a large number of back-end services which help to have better communication. It also makes use of an open-source networking library along with a strong framework that is completely supported by Python and C++. The main reason for Spotify to use Python is it offers a fast development pipeline with the help of Python coding.

Dropbox is a cloud-based storage system that has become popular among users and has also made use of Python. In fact, the creator of Python, Guido van Rossum worked for Dropbox while he was still a part of Google. Rossel worked in Dropbox not as a leader but as an engineer. He improved his ability to share stored data with other users who were part of the Dropbox community.

The Dropbox libraries and the internals have become part of an efficient API which is a part of Python development. Most of these engineers working at Dropbox were happy to have Dropbox development which is based on server-side coding in Python. The usage of various libraries of Python on Mac and Windows systems offered a unique experience.

Reddit is a website that has 540 mn visitors on a monthly basis. The website has been active since 2017 and it can be considered one of the most visited websites in the United States. The website has 73 mn interactions and nearly 82 bn page views.

Earlier, the Reddit platform was built using the programming language Lisp. But in the year 2005, after its launch in the market, the entire coding was changed into Python. Python offers a range of libraries that are highly flexible in the development work. The entire web framework web.py is considered an open-source project. Reddit uses Python because of its wide range of libraries’ advanced architecture.

Quora is one of the most popular question-and-answer platforms having millions of interactions. The company has spent time with several programming languages before narrowing it to Python. Python works efficiently while managing the site but it legs in type checking and it is relatively slow.

Stripe is a startup that mainly deals in online payment services. Several major companies make use of the Stripe platform as a part of a business deal.

Stripe has been developed in Python. Python is preferred for its versatile framework and also the extended set of libraries that helps to create a powerful business application. Stripe is mainly built on an application programming interface that Python offers with cross-compatibility.

The application is highly useful and can be preferred to use either on mobile or using websites. Python offers that technique to remove white spaces in particular characters from the strings when entered.

Pinterest is popularly understood as an online scrapbook and a popular social bookmarking website. It has millions of visitors who share information related to their interests and hobbies. The users can create visual pins that represent their ideas, views, hobbies, and life inspiration.

Pinterest is developed in Python by specifically using Django. It allows users to create designs and share photos of their choice and interest. The entire work of the website can be handled using Python. Python-based websites allow doing data analysis along with data visualization. Python can be used for task automation processes.

NASA also makes use of Python as a part of its work. National Aeronautics and Space Administration (NASA) is well known for its space research and shuttle mission planning and is also among the popular companies that use Python.

Programming language Python has become a part of the Workflow Automation System (WAS). Python can tackle the complexities very effectively. Several future projects that NASA has planned are mainly using Python as the main programming language.

Python can be used in many areas that include front-end and back-end development, application development using data science, and web development that uses Machine Learning along with Artificial Intelligence. It can also be used in DevOps.

Uber has started to ride and share services with passengers at affordable costs. Uber has also started its extended services of food delivery under the name UberEats services. Uber is one of the many companies using Python and its entire setup of the software is mainly based on Python. It makes use of Python, Node.js, and Tornado as the Python framework.

Uber has millions of users who make use of the application while using the hire & share services. Python has been used in the entire development of the application by extending the services from frontend to backend functionalities. Python is mainly used by Uber for its capability to make mathematical calculations.

Amazon is one of the top companies using Python in many areas of development and on various platforms. It makes use of Artificial Intelligence and Machine Learning techniques that can help in offering customized services to users.

The programming language Python helps to keep track of customers’ habits and recommend products and services accordingly. It is mainly used for software engineering.

Python added various features as a part of several systems offered. The powerful libraries have offered flexibility to the web application which works faster. Python offers various tools that are used as a part of the deployment in unit testing.

Besides, hiring professional developers of Python is much easier for SurveyMonkey, due to its high popularity.

Future of Python – What’s next? 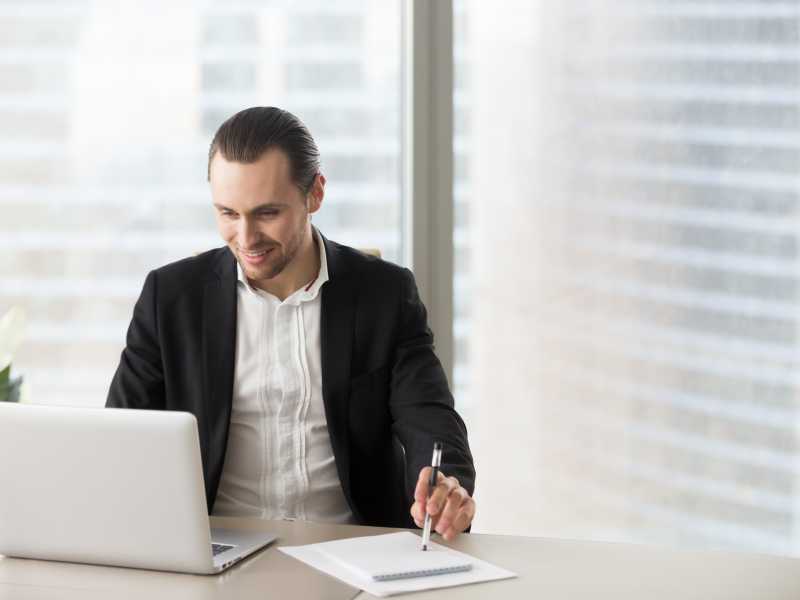 In the next year, it is anticipated that Python will rise by 50% and will become one of the most useful and popular programming languages worldwide. Today most companies use Python as a part of their mean programming language and offer high-quality services to the world. Most and more companies will join the Python club in the coming days due to many of the following reasons:

Data Science: The arena of data science is one of the fastest growing sectors in Python due to its ease to learn. The wide range of libraries offered by Python will be helpful for numerous data scientists around the world.

Cloud Computing: Cloud Computing is the next trend in Python, given its focus on Data Protection, something that the technology stack of Python delivers seamlessly.

Python – one language to rule ‘em all!

Python is an object-oriented and modular language that supports math and AI. It can be considered the future programming language of the world. Python has global recognition that helps extend its services in all different fields and areas of work. The Python community is getting extended and offers a variety of DreamWorks and functionalities as a part of libraries which remains in the favor of developers. Thus, more companies use Python programming language in their software development projects.

If you are looking for the best experts for Python development, then your search has ended.

About the Author: Heli Patel

Heli Patel holds expertise in Python - one of the trending programming languages and she loves to define the ideal software architecture based on the requirement of the project.